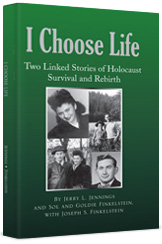 I Choose Life is the true, first person account of two Jewish youths, Sol and Goldie, who survived Nazi concentration camps and transcended despair by choosing life. The book title derives from a harrowing encounter between Sol and the Commandant in Auschwitz. The Nazi cruelly forced Sol to choose between execution by hanging or firing squad. Sol, then 19-years-old, defied him, declaring, “If I have a choice, I choose life!”

Goldie Cukier, a 13-year-old girl, and her older sister were rounded up in a random raid in their neighborhood. An SS guard gave Goldie’s father the “choice” of freeing only one of his two daughters. Goldie volunteered to be taken so that her sister would be spared. It was the last she would ever see her family alive.

I Choose Life describes idyllic childhoods in Radom and Sosnowiec, Poland, in warm and loving families imbued with Jewish pride and values; years of darkness, suffering, separation, loss and death; raids, selections, forced labor camps, cattle cars, and death marches; and survival in Auschwitz, Mauthausen and Bergen-Belsen. Sol says, “A sane person cannot imagine what it was like.”

For years, Sol and Goldie never shared their stories, not even with each other. Now, they have decided to tell their stories, to leave a legacy to their grandchildren, and to help ensure the Holocaust is never repeated.

Sol’s story is full of adventure and suspense, while Goldie’s narrative draws the reader into the poignancy of a young girl’s inner world as she is torn from her family by the Nazis. I Choose Life is two complete and parallel memoirs of survival and rebirth. Together, the two memoirs of I Choose Life illuminate the Holocaust experience in a unique way, offering both male and female perspectives, one told by a person of action and one by a person of feeling, to yield insights into the most monumental tragedy in human history.

I Choose Life is distinguished as a Holocaust testament, not only because it is two complete memoirs of a boy and a girl, but ultimately, because the two stories entwine as Sol and Goldie meet in a Displaced Persons camp in post-war Germany. The book explores the challenges of restoration and rebirth, how two youths regained the ability to trust and love, to rebuild new lives after unimaginable losses, and to move to another continent to start a new family and live the American dream. In one of the most peculiar and fascinating chapters of modern Jewish history, Sol and Goldie tell the story of how hundreds of Jewish concentration camp survivors from Europe found an unexpected new Zion in rural Vineland, Jersey, as a community of chicken farmers.

I Choose Life is also distinguished by its reliance on historical documents. With the help of the research resources of the United States Holocaust Memorial Museum, Sol and Goldie’s son Joseph was able to access original historical records which have become newly available to survivors in search of answers about themselves, and family members lost in the Holocaust. These documents, some of which are reproduced in the book, enabled Joseph to verify and discover new facts and details, including the name and location of a secret V2 rocket factory, dates of prisoner transports, arrival dates at different camps, and lists of prisoners in which Sol’s and Goldie’s names appear.

Through an emotional journey, I Choose Life describes the moving discovery of the final events and fate of Sol’s father, Jacob Finkelstein, following his separation from Sol just a week before liberation in Mauthausen concentration camp. Through research by Joseph, Sol finally learned, while this book was being completed, of the existence of his father’s unmarked grave in Austria. This astounding discovery gave Sol and his family emotional closure, after 60 years of uncertain guilt that Sol carried since the day he and his father were separated in the concentration camp.

The memoirs provide a comprehensive overview of Holocaust events, through the personal experiences of two Holocaust victims. These harrowing stories are told with a sensitivity that makes I Choose Life a valuable resource for Holocaust education for both older children and adults.

The book closes with Sol’s and Goldie’s descriptions of their struggle to overcome their losses and trauma, and Sol’s understanding of the meaning of their survival: “We were determined to survive and not allow the enemy to eliminate Jewish life. We were reduced to nothing, yet we overcame with our humanity intact. We made it, and we made it for our children.”

I Choose Life will touch your heart, with two inspirational stories of extraordinary courage, love and hope.